Since 1996, successive Quebec governments reduced public spending to achieve a zero deficit policy. According to the actual government, the more Quebec province is indebted, the less it is able to maintain its services and to contribute to economic growth. Supporting this doctrine, the Liberal Party of Quebec has has cut public services and social programs more than ever since its election in 2014.

The government wants us to believe that there is no alternative. For them austerity is bound to happen, and it is imperative to cease public investment and to cut in social programs to restore public finances. We know this is a lie. We know that there are other possibilities. 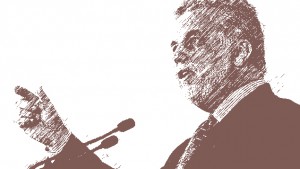 The Coalition opposée à la tarification et à la privatisation des services publics has been campaigning for the past two years to put forward socially just fiscal alternatives that would allow to fund the services the population needs. Thanks to the 18 solutions proposed by the Coalition Main Rouge, the state could get more than 10 billion dollars in additional revenue each year.

On its side, ASSÉ has been campaigning against austerity measures since 2013. More and more sectors of civil society are now joining students to denounce the dismantlement of public services. More than ever,  we have to initiate a real dialog between different groups ready to fight against the watered-down welfare state.

We think the public sector employees’ negotiations is a key in the fight against austerity measures. It is why ASSÉ hopes to open a space of solidarity and discussion by organizing a wide forum uniting a large number of local unions in education and student unions. The Union Gathering for Education is to be a non-partisan and democratic space where local union’s delegates and mobilization committees will be able to talk freely. We believe in the necessity to build a movement of solidarity to protect our public services. This is a call for hope: let’s hope it will be heard.

The event will take place in three steps:

To make sure that all participants have the same information on the government’s cuts and reforms in education, we are proposing two short presentations. The first one will list the measures taken by the liberal government to reduce the academic institutions’ funding. The second will tackle the reforms suggested in the Demers report.

We want to have a preliminary discussion on the demands that the education labor should put forward in the fight to save our academic institutions and our public services. It is suggested that two inter-organizational caucuses be held to encourage a dialog between people from different spheres of education. Theses caucuses would notably focus on possible solutions to counter cuts and reforms in education as well as strategies of solidarity to put forward in the fight against austerity.

3) What can we do to counter the cuts and the reforms in education?

The gathering’s purpose being to find an answer to this question; a moment will be reserved so that the different local organizations can discuss practical proposals of common demands.

The gathering’s goal is to establish the basis of the collaboration between the different organizations invited and to collectively and democratically think of the action plan and demands to put forward to counter the disinvestment and reforms in the education field. It is necessary to review the reforms and what they mean for our settings. We shall also discuss and take position on the alternatives and the means of action that are offered to us.

The gathering’s goal is to get to draft an agreement on which the different delegations can agree and would be ready to bring back and defend in their general assemblies.

Each and every local unions working in education as well as all the local student unions of post-secondary level are invited to participate. Furthermore, we encourage the participation of mobilization committees from the labor movement and from the student movement. This is to foster a large debate based on the experiences of the different actors in education. For more information on the participation modalities , consult the preparation document.